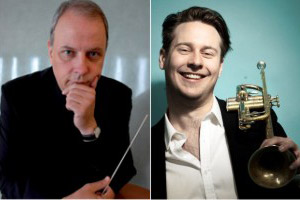 The Swedish conductor THORD SVEDLUND is a highly experienced and versatile musician, educated in Sweden, the Netherlands and the USA. He has a vast knowledge of repertoire and his conducting career has for decades earned him praise by critics and audiences alike. He has conducted several Swedish orchestras, including the Gothenburg, Malmö, Norrköping, Helsingborg, Gävle and Umeå symphony orchestras, as well as the Swedish Chamber Orchestra, Camerata Nordica, Göteborg Wind Orchestra, and Odense Symphony Orchestra. Thord Svedlund has recorded for radio, film and television on numerous occasions. He has a keen interest in inspiring young music students to play together. He has on many occasions worked with the Gothenburg University Orchestra, as well as in other projects with young musicians. Svedlund’s discography presents music by composers ranging from Bach and Haydn to contemporary Swedish. He has taken a special interest in promoting the music of the Polish-born composer Mieczyslaw Weinberg. Hence he was invited to the ancient Polish town Torun to conduct music by Weinberg there. Thord Svedlund has recorded five cd's for Chandos of orchestral music by Weinberg.

Per started playing the cornet at age 6 and continued soon after with the trumpet, receiving lessons from Malmö Symphony Orchestras principal trumpet Björn Lovén. Several years later, at age 22, Per took over his first teachers position as principal trumpet with the Malmö Symphony. At 16, he moved to Germany to start his education in music. After 6 years of studies in Karlsruhe, Germany with Professor Reinhold Friedrich, Professor Laura Vukobratovic and Professor Edward H. Tarr, Per started his career in Malmö and after 4 years as principal he carried on to take over the principal position in Göteborg Symphony, where he currently resides also as main teacher in the Academy of Music and Drama. The german school gave him a lot of opportunities to move around Europe and the world to play concerts. Concert tours to Poland, France, Italy, Switzerland, Austria, Hungary, Serbia, China and Mongolia as a soloist and chamber musician can be mentioned. As a teacher Per has visited Portugal, Norway and Lithuania. Per has worked with conductors such as Neeme Järvi, Gustavo Dudamel, Kent Nagano, Peter Eötvös, David Afkham, Herbert Blomstedt. He performed the piece ”Incantation, Thrène et Danse” by Alfred Desenclos in Göteborg, which also was the first performance of the piece in Sweden after the piece was composed in 1954.