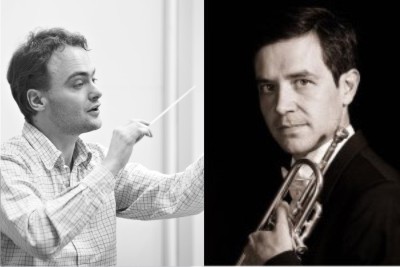 With the participation of the pianist Cristiana Stan

FRIDAY, 11 MARCH 2016, AT 19:00
CONDUCTOR:SIMON DVORšAK
SOLOIST: JURE GRADIŠNIK (trumpet)
Program:
Rok Golob: „Alkiona” (first audition)
Alojz Ajdič: Rhapsody for trumpet and orchestra (first audition)
Pyotr Ilyich Tchaikovsky: Symphony no. 4 in F minor, Op. 36
Simon Dvoršak is a Slovenian conductor and professor of music. He studied choral conducting with prof. Jože Fürst and finished his studies in 2001. He obtained master's degree and continued  to study orchestral conducting with world renowned maestro Marko Letonja. With »summa cum laude« and highest distinction he finished his second master's degree. In 2009 he was accepted at Mountview Academy of Theatre Arts in London, where he got a diploma in Musical theatre. During his stay in London, he conducted several productions in the West End and touring the United Kingdom. He also studied in Spain under Georg Pehlivanian. With great success he conducted all the Slovenian orchestras, i.e. the Slovenian Philharmonic, the Symphony Orchestra of Radio Slovenia, Maribor Philharmonic, Maribor Festival Orchestra and many others. As a conductor he performed abroad (Croatia, Austria, Belgium, Germany, Switzerland, Italy and Spain). As a young conductor he was appointed »conductor in residence« at Slovenian Philharmonic and National Opera Maribor. He was artistis director in different orchestras, the last being Symphony Orchestra of House of Culture. He prepared and conducted a lot of performances in both National Opera Houses in Slovenia(La boheme, Fireworks, Dido & Eneas, The Noblemen of Teharje, Le nozze di Figaro, The Magic Flute, La cecchina ossia La buona figliuola, The Merry Widow, Countess Maritza, ...).As a conductor and pianist, he recorded for National Radio and Television in Slovenia. He is regulary invited to conduct major world premiers of Slovenian and foreign composers. He was one of the founders of House of Culture Celje and its orchestra, with which he is organizing concerts for young musicians from Slovenia and abroad and helping them at the begining of their careers.He shares his knowledge with the young. He was teaching music and piano and collaborated as a mentor on different summer workshops and music projects. He also works as a vocal coach for singers. As a conductor and répétiteur, he worked with acknowledged solo vocal and instrumental performers from Slovenia and abroad. He is the professor for orchestral conducting at the Academy of music in Ljubljana.

Jure Gradišnik - graduated from the Academy of Music in the classof prof. Stanko Arnold has won many awards at national competitions, including scholarships Yamaha 2003 Already during his studies he became a trumpet player SNG Opera and Ballet Ljubljana. Actively participates with other orchestras (Festival Maribor, No Borders Orchestra), various chamber ensembles: the brass quintet Si Brass in Seraphim Trio, a duet (M. Gamboz Gradišnik - harp), since 2004 a full member of the Chamber Orchestra Soloists, which has performed and recorded many new works by Slovenian composers. Heregularly attends masterclasses recognized trumpeters such as: J. Thompson, B. Nilson, B. Shew, A. Vizzutti, F. Reinhold ... In 2008 he was admitted to the Mozarteum in Salzburg, where he further studied in the class of prof. Hans Gansch. As a soloist he has performed with the Symphony Orchestra of RTV Slovenia, Chamber String Orchestra of the Slovenian Philharmonic Orchestra of the Slovenian Armed Forces, the Maribor Festival Chamber Orchestra, Orchestra of Opera and Ballet Ljubljana, Slovak Chamber Orchestra - Cappella Istropolitana, the orchestra of the Croatian Armyand  the Slovenian Philharmonic Orchestra. To carry out the concert H. Tomasija with the Slovenian Philharmonic received the 2005 Student Prešeren Award. He has performed with renowned musicians (S. Arnold, R. Galliano, B. Slokar, S. Mead, ...) and under the batonof many distinguis hed conductors such as: A. Nanut, U. Lajovic, M. Letonja, E. Shao, D. Rossberg, T. Hanus,. . . Since 2004, he teaches in the School of Music at St. Stanislava, 2011, he became an assistant red.prof. Stanko Arnold at theAcademy of Music in Ljubljana. Gradišnik was from 2003-2012 solo trumpeter Orchestra, Opera and Ballet Ljubljana and is now employed as a solo trumpeter RTV Slovenia Symphony Orchestra.