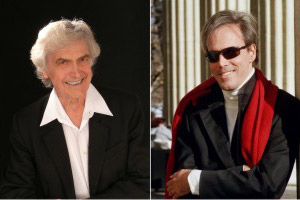 FRIDAY, 6 MAY 2016, AT 19:00
CONDUCTOR: ÁDÁM MEDVECZKY
SOLOIST: TAMÁS ÉRDI (piano)
Program:
Ferenc Erkel: Overture to “Hunyadi László”
Sándor Balassa: Romance, Op. 40/b (first audition)
Wolfgang Amadeus Mozart: Symphony No. 41 in C Major, K. 551, “Jupiter”
Ludwig van Beethoven: Piano Concerto No. 3 in C minor, Op. 37
ÁDÁM MEDVECZKY was born in Budapest, Hungary in 1941. His studies included piano and percussion studies. He joined the Hungarian State Symphony Orchestra in 1960 as a timpanist, where he remained in the following nine years. He began his conducting studies at the Liszt Ferenc Academy of Music in Budapest in 1968. Having graduated, he attended different courses in Italy.
In 1969, he joined the Hungarian State Opera as a répétiteur. Later he became permanent conductor. He has been working with the Opera ever since. In 1990, he was appointed principal music director, which post he held for three years.
In 1974, he came second in the first-ever International Conducting Competition organized by the Hungarian Television. In the same year he became a teacher at the Academy of Music as well. Initially, he was head of the youth orchestra, presently he is associate professor at the Vocal And Opera Studies and the Conducting Department.
He held the post of artistic director of the Hungarian Post Office Orchestra between 1988 and 1997. From 1997 he was principal conductor of the Győr Philharmonic Orchestra until 2010. Although he is most active in his native country as a conductor, he has led orchestras in almost all nations of Europe, and he has been guest conductor in North and South America as well as Asia. He was awarded the Liszt Ferenc prize in 1976. He was a Merit Award recipient in 1988. In 2011, he received the most prestigious Kossuth Prize.

Pianist TAMÁS ÉRDI lost his eyesight as a result of an oxygen overdose in a defective incubator. His interest in music was discovered at a very young age. His teachers use a unique method called “the structural method” to teach Tamás play the piano, whereby he virtually “recomposes” the music he is introduced to.

At 15, he plays a Mozart piano concerto at the prestigious Budapest Spring Festival with leading conductor Tamás Vásáry.

At 17, he wins the Louis Braille International Piano Competition in Moscow and gets admission to the Music Academy in Vienna.

At 18 they win the Gina Bachauer Piano Competition with a five-piano arrangement in Salt Lake City.

In 2012 he is closing act of the Liszt Bicentennial events in Romania with the Enescu Symphonic Orchestra.

He performs at Carnagie Hall, Lincoln Center, plays in Siberia, Russia, Kuwait, Lebanon, US, Canada and several European cities, most recently in London at the Barbican Centre and works with all symphonic orchestras in Hungary.

He plays for 4,000 people under the famous Chopin statue in Warsaw, Poland several times.

In 2008 Tamás receives the Junior Prima Prize Awarded to talented individuals under 30 and wins Prima Primissima in 2010, which is the most prestigious professional recognition for Hungarian individuals by the private sector. In 2012 he receives the "Order of Merit of the Hungarian Republic, Knight’s Cross" state decoration.

34 year-old Tamás Érdi has made concert appearances in 27 countries so far.