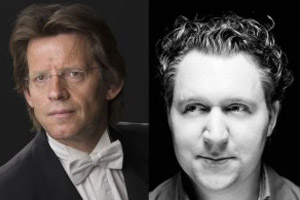 Born in 1980, Arno Piters studied clarinet and E-flat clarinet with  Jan Cober and Willem van der Vuurst at the Maastricht Conservatory, where he earned an honours diploma. He then went on to study with George Pieterson at the Conservatorium van Amsterdam and was again awarded an honours diploma. Piters was a member of the National Youth Orchestra of the Netherlands, the Gustav Mahler Jugendorchester and the European Union Youth Orchestra, where he performed under such conductors as Pierre Boulez, Bernard Haitink and Vladimir Ashkenazy. He has made solo appearances with the Residentie Orchestra, the Limburgs Symfonieorkest and the Nuremberg Symphony Orchestra, among others. As a chambermusic player, he has performed at festivals both in and outside the Netherlands with Janine Jansen, Mischa Maisky and Daniel Hope.
Piters was a member of the Netherlands Radio Symphony Orchestra from 2001 to 2003. He was subsequently appointed as clarinettist and E-flat clarinettist with the Royal Concertgebouw Orchestra in Amsterdam. He's a regular guest principal with the Mahler Chamber Orchestra. He's been invited to play with the Israel Philharmonic Orchestra under Zubin Mehta and the the World Orchestra for Peace under direction of Valery
Gergiev. He teaches at the Conservatory of Amsterdam and masterclasses worldwide.