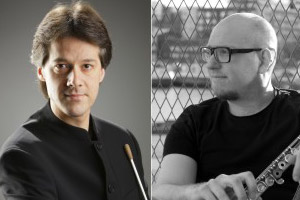 The Finnish conductor Jukka Iisakkila versatility and broad repertoire have taken him to symphony orchestras, chamber orchestras, contemporary ensembles and opera houses throughout Europe. A regular guest with many of the leading Scandinavian orchestras, conductor Jukka Iisakkila is renowed for his innovative programming. He was the Chief Conductor and Artistic Director of the Pori Sinfonietta from 2004 to 2012. From 2010 to 2012 he was the Principal Guest Condcutor of the Danish Radio Chamber Orchestra and is currently the Principal Conductor and Artistic Advisor of the Nordic Contemporary Orchestra. Since 2003 he has been the Artistic Director of one of the most innovative and artistically rich and praised music festival in Scandinavia, the Saaksmaki Sounds –music festival.
Iisakkila is founder of both festival and the Saaksmaki Festival Orchestra in residence. Jukka Iisakkila has achieved nationally acclaimed results with innovative programming. He has succeeded in combining traditional repertoire with music which is rarely heard in the concert hall with great success. He has launched highly successful programs collaborating with other art institutions as well as pre-talks and hosted events bringing the audience closer to the musicians. Mr. Iisakkila is also recognized for his committed advocacy of music education and his devotion to young audiences, has created arts education programs and teaches at the Youth Orchestra Academy in Orivesi, Finland, and at the Sibelius Academy orchestral music department.
“I'm hugely impressed, especially by Jukka Iisakkila's astonishingly assured interpretation of Sibelius's Third Symphony. Jukka, is a graduate of the same class that has produced an explosion of Finnish conducting talent in recent years, from Esa-Pekka Salonen to Sakari Oramo. Martyn Brabbins is full of praise. "He has a remarkably clear beat, he knew exactly what he wanted and how to get it from the players.
The BBC Philharmonic orchestra was completely relaxed with him. I hope you all realise why Jukka is so good," he says. The Guardian, July 14th 2008 Iisakkila is known for his affinity with contemporary music and has conducted numerous world premieres having close links with many of today’s foremost composers.
Jukka Iisakkila conducts all Finnish orchestras on a regular basis and enjoys frequent collaboration with the majority of Danish and Swedish orchestras. Other guest appearances include orchestras in United Kingdom, Canada, Japan, New Zealand,Belgium, Holland, Norway, Hungary, Russia, Italy and Germany.
Recent and upcoming highlights include concerts in Japan with the Nagoya Philharmonic Orchestra and in New Zealand with the New Zealand Symphony Orchestra and Auckland Philharmonic. Other season highlights include performances with the Jena Philharmonie, Staatsorchester Rheinische Philharmonie, Orchestra dell’ Arena di Verona, Savaria Symphony Orchestra, Aarhus Symphony Orchestra, Danish Radio Chamber Orchestra, Copenhagen Philharmonic, Norrlands Opera, Helsinki Philharmonic, Tampere Philharmonic, Avanti! and Tapiola Sinfonietta.
His numerous guest conducting appearances have included engagements with the symphony orchestras in Canada i.e. Ottawa, in Denmark; Odense Symphony Orchestra, Danish National Radio Orchestra, Aarhus Symphony Orchestra, Copenhagen Philharmonic, in Sweden with the Swedish Radio Symphony Orchestra, Malmo SO, Gothenburg SO, Helsingborg SO, in Italy with the Orchestra dell’Arena di Verona, Orchestre della Toscana, in Hungary with the MAV Symphony Orchestra and the Savaria Symphony Orchestra, in Germany with the Jena Philharmonie, Staatsorchester Rheinische Philharmonie, Düsseldorf Symphony Orchestra, MDR Symphony Orchestra and the Bayerische Staatsoper. In Finland Mr Iisakkila has worked regularly with the Helsinki Philharmonic Orchestra, Tampere Philharmonic Orchestra, Turku Philharmonic Orchestra, Oulu Symphony Orchestra, Sinfonia Finlandia, the Sibelius Academy Symphony Orchestra, Tapiola Sinfonietta and Avanti! Orchestra.
Iisakkila has conducted opera performances throughout various Scandinavian opera houses . His operatic repertoire spans from Mozart to contemporary operas including composers like Verdi, Donizetti, Poulenc, Bartók, Berg, Zimmermann and Luigi Dallapiccola. Highly successful productions span from Don Giovanni to Wozzeck and from Zimmermann’s Soldaten to music by Helmut Lachenmann. Productions include B.A.Zimmermanns “Die Soldaten” in Canada, in Sweden Giuseppe Verdi’s “La Traviata”, in Italy Luigi Dallapiccola’s “Il Priginiero”, at the Finnish Opera Festival W.A. Mozart’s “Le Nozze di Figaro” and “The Abduction from Seraglio”. Other productions include Giacomo Puccini’s “Gianni Schicchi”, Francis Poulenc’s “La voix humaine” and “Dialogues Des Carmelitas”, Arnold Schönberg’s “Erwartung”, W.A Mozart’s “Don Giovanni” and “Wozzeck” by Alban Berg. Upcoming opera productions include Alban Berg “Wozzeck”, Leos Janacek’s “The Cunning Litltle Vixen”, premier of the Ilkka Kuusisto’s “Motherlands Daughter”, Donizetti’s “Don Pasquale” and Tchaikovsky’s “Eugene Onegin”, Shostakovich’s “The Nose” and Bernstein’s “Candide”.
Jukka iisakkila is the recipient of many major awards including the Royal Music Academy Award in Sweden 2006; Finnish Culture Foundation award for achievements the field of conducting; in 2008 he was named “Cultural person and Musician of the Year 2008” for his work with the Saaksmaki Sounds! –music festival. Jukka Iisakkila won the First Prize in the Helsingborg Nordic Conducting competition and the Third Prize in international Jorma Panula Conducting competition. Jukka Iisakkila graduated from the orchestral conducting diploma class at Royal Academy of Music, Stockholm, after studies with the world renowned Professor Jorma Panula. Besides Professor Jorma Panula his most important teachers have been Martyn Brabbins, Esa-Pekka Salonen (Conductor Laureate of the Los Angeles Philharmonic, Principal Conductor of the Philharmonia Orchestra), and Alan Gilbert (Music Director of the New York Philharmonic).
During his studies in Sweden at the Royal Academy of Music he had a close relationship with Salonen and Gilbert and was invited to join for the first Baltic Sea Festival in Stockholm led by Maestro Esa-Pekka Salonen. Jukka Iisakkila has fulfilled his studies in Italy, Hungary and Holland with such composers as György Kúrtag and Peter Eötvös. Born in Tampere, Finland, Jukka Iisakkila studied percussions, double bass and piano first at the Tampere Conservatory of Music graduating majoring piano and percussions. He then finished his diploma, Masters degree, at the Royal Danish Academy of Music. He completed his studies majoring in percussions and acted as highly gifted percussionist in various orchestras in Finland. Still in his early age he also completed his studies at the University of Central Finland with a Master of Arts degree both in musicology and composition and music education.

Sami Junnonen is an international flute soloist from . He was born in in in 1977 and moved to in 1995 to study flute in the . He also studied at the Conservatoire national musique et danse de Lyon and the of Music before graduating Master of Music with highest credits in 2008 from the . His 2012 Debut Recital in the Helsinki Music Centre of Finland was promoted by the and received outstanding reviews.

Respected for his versatility, Junnonen has established a widespread and renowned international career by giving recitals and featuring as soloist with symphony and chamber orchestras all over the world throughout Europe, Japan, China, U.S.A., Australasia, and both South and Central America. He performs frequently in prestigious festivals and concert series. Junnonen has recorded for the Finnish Radio Broadcasting Company, Ondine, , Sony BMG, Alba and SibaRecords. He is a multiple prize winner of numerous international music competitions.

Currently, he works as the principal flutist of Hong Kong Sinfonietta. He is also an active composer and arranger.
Junnonen is sponsored by Muramatsu Flute MFG. Co., Ltd. who have handcrafted both his 24 carat and 14 carat gold flutes.