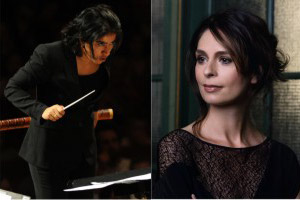 Danish conductor Maria Badstue attracted great attention as prize winner at the prestigious Lovro von Matatic Competition for Young Conductors in 2011. Following the award, she has gained recognition as one of the most promising young Scandinavian conductors, and her recent seasons include performances with the Gothenburg Symphony, South Denmark Philharmonic, Odense Symphony, Helsingborg Symphony, Kristiansand Symphony, Aalborg Symphony and Storstrøm Symphony. May 2013 saw her official Danish debut with the Copenhagen Phil, and she made her opera conducting debut in 2012 in with the premiere of ANGELO by Lars Klit. The summer of 2014 saw her as co-conductor of the highly acclaimed youth orchestra "Orkester Norden" where she conducted the majority of the rehearsals for Thomas Søndergaard. Furthermore she led her own concert production at the Vendsyssel Festival with the orchestra.

With a great interest in contemporary music, Maria has premiered several pieces, and she has appeared with a.o. the Cikada Ensemble in . She has also performed with Slesvigske Musikkorps, and later this season she conducts the opening concert of the Rued Langgaard Festival in a programme celebrating the music by Rued Langgaard and Richard Strauss.

In 2011 Badstue was invited to prepare two concerts in in cooperation with Jorma Panula in a programme consisting of music by Sibelius and Mahler, and in 2012 she was invited, on a short notice, to conduct the Hämeenlinna City Orchestra in a masterclass with the conducting class from the . Following this event she was awarded the Hämeenlinna City Orchestras Stipend, and an invitation to conduct the orchestra in the celebration of Finnish composer Tauno Marttinen. She has furthermore appeared with the Savaria Symphony at the annual Bartok Festival organized by the Budapest Philharmonic.

Since 2007 she has studied privately with prof. Jorma Panula and she has followed him closely in and abroad.

Maria Badstue earned her master`s degree in conducting from the Norwegian State Academy of Music with Jukka Pekka Saraste and Ole Kristian Ruud as her main teachers. Other influences include George Hurst at the Canford Summer School of Music.

During the 2012-2013 season she developed a close relationship to the South Denmark Philharmonic having conducted the opening concert and various school and presentation concerts. She is the founding director of the annual "Nordic Masterclass for Conductors" organized in cooperation with the orchestra.

Originally trained as a trumpetist she holds a Master`s Degree from the Carl Nielsen Academy of Music, and she has played with the Odense Symphony.

Maria Badstue has received continuos support from the Augustinus Foundation, and in 2012 she was awarded the Arne Hammelbo Education Scholarship from Danish Conductors' Association.

Andrea Pellegrini is one of ’s most sought-after and award-winning mezzosopranos, both in opera and on the concert stage. In 2008 she received the Annual Prize of the Music Critics’ Association of Denmark. Education: The of Music: 1998-2003 The Royal Danish Opera Academy: 2003-2006 Opera: Debut at the Royal Danish Theatre: Rosina in Rossini’s “The Barber of Seville” in 2006. Roles at the Royal Danish Theatre, the Danish National Opera, and Opera Hedeland: Cherubino in Mozart’s ”Le nozze di Figaro” 2006 and 2012, Annio in Mozart’s ”La clemenza di Tito” 2007, Alisa in Donizetti’s ”Lucia di Lammermoor” 2007, Mercedes in Bizet’s ”Carmen” 2007, Valencienne in Lehár’s ”The Merry Widow” 2008, Zaida in Rossini’s ”Il turco in Italia” 2009 Second Lady in Mozart’s ”Die Zauberflöte” 2009, Idamante in Mozart’s ”Idomeneo”, 2010 Adalgisa in Bellini’s ”Norma” 2010, Armastre in Handel's ”Xerxes” 2011, Mercedes in Puccini's ”Madama Butterfly” 2013. Concert: Miss Pellegrini's broad concert repertoire includes all oratorios by Johann Sebastian Bach, Händel’s Messiah and Judas Maccabeus, Haydn’s Lord Nelson Mass, Mendelssohn’s Elijah, Rossini’s Petit Messe solennelle, Pergolesi’s Stabat Mater, Beethoven’s Ninth Symphony, Mahler’s Eighth Symphony and Des Knaben Wunderhorn, Dvorak’s Requiem, Mozart’s Requiem, Verdi’s Requiem, César Franck’s Les Béatitudes, and others... She has performed with Ochestras in Norway/Trondheim, Pori Sinfonietta , Helsingborg Symfoni Orchestra , Italian Orchestra from the Puccini Festival, and the leading Danish orchestras and ensembles, including the Danish National Symphony Orchestra, the Danish National Chamber Orchestra, The Royal Danish Orchestra, and all the regional Danish orchestras. She has worked with conductors such as Helmuth Rilling, Adam Fischer, Thomas Søndergaard, Giancarlo Andretta, Christian Badea, Giordano Bellincampi, Anna Maria Helsing, Tobias Ringborg, Ion Marin, Brad Cohen. Acclaim: Prizes and grants include: Roager Foundation’s Talent Prize in 2005, The Danish Wagner Society’s grant for young singers in 2006, Reumert Talent Prize in 2007, Annual Prize of the Music Critics’ Association of Denmark in 2008, Folmer Jensen’s Bursary from in 2009, Elisabeth Dons Mindelegat 2013, Axel Schiøtz Award 2013 and Very Clicquot Champagne Award also in 2013. Recordings: Andrea Pellegrini can be heard on several recordings, notably in Bach’s Christmas Oratorio, orchestral works of Peder Gram, Poul Schierbeck's opera ”Fete Galante” with The Danish National Orchestra. A production of John Frandsen's Requiem with The Danish National Orchestra is to be released in spring 2014. Building bridges, seeking new frontiers: Through both career and studies Andrea Pellegrini have shown a special interest in crossing over between art forms, in an attempt to take classical music into new contexts. This has led to the development of new musical works. She has appeared in several of the composer and author Martin Hall publications, both as a contributor and the featured soloist, including the theaterconcert Kinoplex on the Copenhagen Music Theatre and latest the release of the album "If Power Asks Why" together with pianist Tanja Zapolski (nominated for the P2-Radio Award, Category New Music). Miss Pellegrini is a frequent initiator of interdisciplinary artistic projects such as Mignon - concert with pianist Katrine Gislinge and author Josephine Klougart - and "Snow falls as Snow", an European Requiem composed by Christopher Møller (SPOT festival 13). The Requiem brings together electronica, rock, classical song and visual performance. She has also established a Nordic Piazzolla Orchestra which in the summer of 2012 spearheaded a groundbreaking new setting of Astor Piazzolla's "Maria de Buenos Aires" at the Copenhagen Opera Festival. Every year she is hosting the classical festival “Classic on the edge” (Klassisk på kanten), she is artist in residence in the city of and furthermore she is ambassador for “The House of Singing” (Sangens Hus).