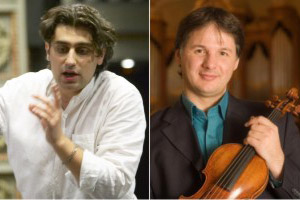 Mihnea Ignat is one of the leading Romanian conductors of his generation. Born in Craiova in 1980, begins studying piano and then goes on to study Composition and Orchestral Conducting at the National University of Music from Bucharest. He graduates in 2005 with the highest distinctions and immediately follows the Conducting Master Course at the same University with the renowned Romanian conductor Horia Andreescu. He completes his education with a scholarship at the Universität für Musik und Darstellende Kunst in Vienna and participates in various conducting master classes.

Since September 2005 he is Artistic Director and Principal Conductor of the Philharmonic Orchestra of the University of Alicante, Spain. His work with this orchestra has been hailed as “marvellous” by local and national critics. He conducted the orchestra to great acclaim in such halls as Auditorio Nacional de Madrid, Auditorio de Zaragoza, Auditorio de Murcia, Auditorio de Alicante, etc.. During the 2009/10 season he was also Associate Conductor of the National Symphony Orchestra of the Dominican Republic.

During the IX Edition of the “A. Toscanini” International Conducting Competition he won the Special Prize of the Filarmonica Toscanini through the direct vote of the orchestra. He is also a prize winner in the conducting competitions organized by the Orquesta de Córdoba (Spain) and Bilbao Symphony Orchestra (Spain).

“...a scintillating account of the Intermezzo from Puccini's Manon Lescaut. Long- phrased, highly coloured and astonishingly intense, it elicited roars of approval from the audience.”  (Martin Adams, The Irish Times)

Born in Craiova, Romania, Mr. Prunaru began his violin studies at the age of 6 with Professor Oprisan. His teachers: Mr.Berbec, Ms. Mihaela Mailat, Ms.Adriana Carpen and Ms.Cornelia Bonzetti, guided him through his early years. During this period he won seven national competitions and 1st prize at the International Kocian competition of Czechoslovakia. Then in 1990, Mr. Prunaru was invited by violinist and Maestro Alberto Lysy to study with him at the renowned Menuhin Academy of Gstaad, Switzerland, where he worked among great artists like Lord Yehudi Menuhin, Igor Oistrakh, Ruggiero Ricci, Nikita Magaloff, Jean- Pierre Rampal, Peter-Lukas Graf, and Pierre Amoyal. Mr. Prunaru completed his professional studies with Miss Dorothy DeLay in New York, where he also actively participated in Master Classes with Itzakh Perlman. The Swiss record company Claves released all three violin concertos by Saint-Saëns where violinist Liviu Prunaru is accompanied by the Ensemble Orchestral de Paris and the distinguished conductor Lawrence Foster. As a last addition to his discography 3 recordings came out in 2005, Beethoven's Integral violin and piano Sonatas, with Dana Protopopescu as partner, Vivaldi's Four Seasons with Virtuosy from Lviv, conductor Serhyi Burko and Dvořák's violin concerto with David Angus, conductor and Symfonie Orkester of Flanders.

The 2010-2011 musical season was to include tours, recitals, concerts and Master classes in US, Korea, Japan, China, Luxembourg, Denmark, Sweden, Norway, Austria,

In September 2006, after 14 years of teaching at the Menuhin Academy, Liviu Prunaru became concert master of the Royal Concertgebouw Orchestra in Amsterdam which received, in 2008, for the first time, the title of the best orchestra in the world!

October 2010 makes another turn in Prunaru’s musical life with when he accepts to become the musical director of International Menuhin Music Academy in Switzerland and therefore to continue the tradition of his beloved Masters Yehudi Menuhin and Alberto Lysy!

He is playing on a Stradivari dated 1694, graciously offered by the Concertgebouw’s board of sponsors.