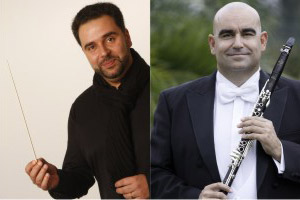 Acclaimed Portuguese conductor Rui Pinheiro regularly conducts all the major orchestras in Portugal, and in January 2015, Rui Pinheiro took up his new appointment as Principal Conductor and Artistic Director of Orquestra Classica do Sul in Algarve, Portugal.  In 2015, Pinheiro returns to conduct Orquestra Gulbenkian in March, April, and May; Barbieri’s Los Diamantes de la Corona at Teatro Nacional de São Carlos, Lisbon, in February; and three performances with Orquestra Sinfónica do Porto Casa da Música in May.

Pinheiro also had successful return engagements with the Bournemouth Symphony Orchestra in the UK (February and March), Orquestra Classica do Sul (March and April), Orquestra Classica da Madeira (May), a Verdi and Wagner programme including two world premiere performances of commissions by Portuguese composers with Orquestra Sinfónica Portuguesa at the Dias da Musica Festival at Centro Cultural de Belem, Lisbon (which was broadcast on Portugal's national radio: Antena 2); and a performance with Orquestra Sinfónica Portuguesa at the Almada Theatre, Lisbon, including Strauss: Death and Transfiguration and Schumann’s third symphony.

Recent UK highlights include concerts with the Orchestra of Welsh National Opera (at the Fishguard International Music Festival), at the Philharmonia’s City of Dreams: Vienna Festival at London’s South Bank Centre, for Proms Plus (broadcast on Radio 3) and at the Chichester Festivities (with the Bournemouth Symphony).

In 2012, Rui Pinheiro completed his tenure as Conductor in Association of the Bournemouth Symphony Orchestra, during which he conducted the BSO in many key concerts, including their Hall of Fame and Diamond Jubilee celebrations.

He finished his Bachelor’s Degree and Dese (Diploma in and Specialized Studies) at ESMAE with Professor Antonio Saiote and received the Prix de Perfectionement from the Conservatoire de Versailles (Versailles Conservatory) in the class of Professor Phillipe Cuper, premier soloist with the Paris Opera Orchestra. He participated in master classes with Walter Boykens, Guy Deplus, Philipe Cuper, Guy Dangain, Michel Arringhon, Michel Collins and Paul Mayer.

He was a semi-finalist in the International Competition in and won the Aurelian Octav Popa Competition in . Carlos Alves Piçarra is a recognized soloist and chamber music artist and his expanding international activity includes performances in countries such as the US, Russia, Germany, Austria, Netherlands, Norway, France, Italy, Spain, Belgium, Luxembourg, Romania, Macau, Brazil, etc.

He is a renowned concert artist who performs regularly in the most prestigious concert halls in . In the Master Pieces Cycle at Guimarães 2012 - European Capital of Culture, he was invited to be the soloist in the world premiere of Mário Laginha’s Concerto for Clarinet and Orchestra. He integrated the European Union Youth Orchestra and collaborated with Orquestra Gulbenkian and Regie Sinfonia, in .

His discography includes Mozart’s Concerto for Clarinet and Orchestra with conductor Rui Massena and Orquestra Clássica da Madeira, for Emi Classics and the Integral II for Solo Clarinet by João Pedro Oliveira at the invitation of the composer himself. He recorded a CD with Caio Pagano, Daniel Rowland, Caterine Stryncx and Paulo Álvarez with works by Olivier Messiaen (Quartet for the End of Time) and Béla Bartok (Contrasts) for Numérica. In his CD recorded in the with renowned pianist Caio Pagano – Recital in the West (2010) –, the American press found the best interpretation of Brahms First Sonata. “… the single best performance of the first Brahms Clarinet Sonata I've ever heard: that means it is not only musically expressive, phrased with sensitivity and intelligence, but also that Carlos Alves gives his clarinet a beautiful, rounded, plummy tone.” (, July 2010).

He is a founding member of Ensemble Artclac together with accordionist Paulo Jorge Ferreira.

Carlos Alves has also experienced the world of theatre, performing live at Jacinto Lucas Pires’ Figurantes and Molière’s Don Juan, both staged by Ricardo Pais, at Teatro Nacional de S. João. He also participated in Sombras with notorious artists like Mário Laginha, Ricardo Pais and Paulo Ribeiro, among others. This particular play was on tour in , , Viseu, Guimarães, , , and and is also scheduled for and .

Carlos Piçarra Alves is a Buffet Crampon artist and is considered to be one of the great clarinetists of his generation.