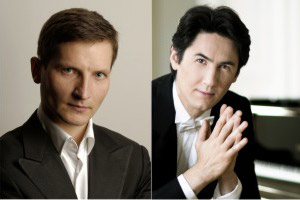 Modestas Barkauskas (b.1982) began to study music at the age of 14. In 2007 he finished his postgraduate studies at the Lithuanian Academy of Music and Theatre at the class of prof. Jonas Aleksa and was awarded an MA diploma in choir conducting. Under the guidance of a leading Lithuanian conductor prof. Juozas Domarkas he finished his studies in 2012 of symphony and opera conducting . He was awarded another MA diploma.  Modestas Barkauskas is one of the most accomplished and well-known young Lithuanian conductors. Since 2010 M. Barkauskas has been constantly invited as a visiting conductor to the most important Lithuanian orchestras: Lithuanian National Symphony, Lithuanian Chamber, Lithuanian National Opera and Ballet Theatre Orchestra, Kaunas City Symphony orchestra, Klaipėda State Musical Theatre Choir and Orchestra. Since 2008, Modestas Barkauskas is artistic director and conductor of youth symphony orchestra in Vilnius B. Dvariona’s school of music. With this orchestra he has given concerts in Germany, Belgium, Poland and recorded 3 CD‘s.  His repertoire ranges from music of the seventeenth century to contemporary work and encompasses all genres: symphonic, operatic and chamber. M. Barkauskas dedicated his energy and passion to audiences of all ages. Conductor maintained a leading role in the development of the Family and Education Series and conducted regularly on the Lithuanian National Symphony orchestra’s classics and pop concert series.  He is a guest conductor forThe Mstislav Rostropovich Charity and Support Foundation ”Support for the Children of Lithuania”. His recent engagements include performances with pianist Ivo Pogorelich, saxophonist Roberto Molinelli and Cascade Youth Symphony Orchestra (USA). Currently he lectures at the Conducting and Singing Departments of the Lithuanian Academy of Music and Theatre.

Mr. Uinskas is a frequent guest at many international music festivals throughout Europe and the USA, including the Aspen Music Festival (USA), the Music Festival of the Hamptons (USA), the South Shore Music (USA), and Holland Music Sessions. Also, Mr. Uinskas has appeared as a soloist at the Verbier Festival as recipient of the Reuter’s Grand Prix, awarded by the festival.

His repertoire includes works by a wide range of composers, from Johann Sebastian Bach to 20th Century, however composers of the romantic era dominate significant part of his repertoire. Recent releases include Uinskas' CD of his Chopin recital and the DVD of his live concert at the Berlin Philharmonie.

Mr. Uinskas is a frequent guest on the Radio and TV programs, including BBC Radio 3 program In Tune; the classical music radio station of The New York Times, program Reflections from the Keyboard on the WQXR with David Dubal, Lithuanian National Television and Radio and many others.

The summer (2010) Mr. Uinskas became an artistic director of the “New Musical Generation summer festival and academy”, to which he invited the most outstanding musicians from ten countries, who gave concerts ten days in a row, as well as during the day time taught academy students from all over the world.  Mr. Uinskas also actively teaches students at Masterclasses, organized by the main Lithuanian high school - National M. K. Ciurlionis school of Arts and at main University - Lithuanian Academy of Music and Theatre. Along with his concert career Mr. Uinskas participates in an outreach programs in promoting classical music for the youth. From the 2006, pianist develops and runs a classical music educational program in the high schools of Lithuania. The purpose of the project is to present live classical music to the young people. The project turned out to be a great success and was well received by students. For the whole project time, life classical music was heard by about 8000 students.

Kasparas Uinskas was born in Lithuania. He began studying the piano at the age of six. He studied at the Lithuanian Academy of Music and Theatre, where he graduated his Doctoral studies, Frédéric Chopin Music University in Warsaw (with prof. Bugaij), Poland, and The Juilliard School in New York (with the prof. Kalichstein), as a recipient of the Vladimir Horowitz Scholarship.