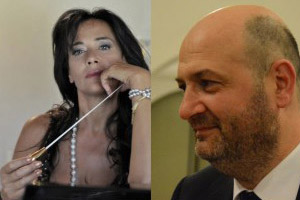 the Philharmonic Society of Craiova

She is piano professor at Conservatory  “Benedetto Marcello” in Venice.

In world premiere she conducted the Opera “In Filanda” by Pietro Mascagni at Teatro Mercadante di Napoli with the Orchestra “I Solisti di Napoli”.

Several times she was invited to take part in many television programs like “Prima della prima” for premiere of Nicola Sani Opera “Una favola per caso”, directed by  Gregoretti and by the italian state radio programs .

Susanna Pescetti is music-director and vice-president  of the Chamber Orchestra  “I solisti di Napoli”, created by the Association “Napoli Capitale Europea della Musica”,  which wants to rediscover Operas of 1700 century neapolitan  musical heritage.

She was awarded of  gold medal of honor in arts fields by the President of Italy.

Edoardo Strabbioli is a musician of great versatility, whose career embraces chamber music, solo playing, duo playing and teaching. After completing his piano studies at the Conservatory of Milan under Carlo Vidusso, he started a solo career appearing in recital and in concerto with orchestras like the Chamber Orchestra of Stuttgart, the Radio Orchestra in Cologne, the Mantova Chamber Orchestra. His activity also includes recordings for the Italian Radio and Television, the Mitteldeutscher Rundfunk and other European broadcasting stations.

His intellectual and musical curiosity played a fundamental role in his decision to establish a closer relationship with the world of chamber music and in the recent past years he has worked with artists such as Frank Peter Zimmermann, Saschko Gawriloff, Kyoko Takezawa, Pierre Amoyal, Sergej Krylov, Marco Rizzi, Liana Issakadze, Wen‐Sinn Yang, the Shostakovich String Quartet and many others. With them he has performed in the most important concert series of Europe including the Concertgebouw in Amsterdam, the Gewandhaus in Leipzig, the Semperoper in Dresden, the Auditorium Nacional de Madrid, the Tonhalle in Zürich, the Auditorium du Louvre and has been guest of international festivals like the Schleswig‐Holstein Musik Festival and the Ludwigsburger Schloss‐Festspiele.

He was invited by Pierre Amoyal to perform in Vilnjus for the celebration of the 100th anniversary of Jascha Heifetz’s birth and in 2002 his first visit to Japan, invited by Kyoko Takezawa, has been much appreciated by critics and public alike.

Other important engagements have been the live broadcast in California as Special Guest of the Philip Lorenz Memorial at the Fresno University, concerts with the soprano Cecilia Gasdia and the recital with Kyoko Takezawa at the Wigmore Hall in London in a concert live broadcasted by BBC Radio 3.

He has recorded for many national broadcast networks like RAI, BBC, DRS 2, AVRO, Bayerischer Rundfunk, Mitteldeutscher Rundfunk and Radio France and participated to Frank Peter Zimmermann’s recording dedicated to Ysaÿe for EMI.