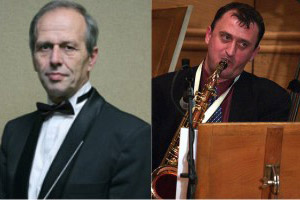 Plamen Djouroff graduated from the State Academy of Music in Sofia in 1975 majoring in Piano under Professor Mara Balsamova, Conducting under Professor Konstantin Iliev and Composition under Professor Marin Goleminov. In 1972, while still a student, he was prizewinner at the Svetoslav Obretenov National Piano Competition and in 1974 he received an award from the Union of Bulgarian Composers for new music performance. From 1976 to 1981 he conducted the Pleven Philharmonic. He appeared as guest conductor with lots of Bulgarian and foreign orchestras like the Philharmonic in Mexico, the symphony orchestras in La Havana, Flensburg, Sarajevo, Skopje and Saint Petersburg. In 1984 he went to Vienna to study under Karl ?sterreicher at the Musikhochschule. Since 1988 he has worked with the Sofia Soloists Chamber Ensemble. Among his radio and TV recordings (over 300) are a series of premieres of works by Bulgarian and foreign composers, the complete piano concertos by Johann Sebastian Bach, the complete works written for guitar and orchestra, recorded for the USA, as well as other 15 CDs. Together with Sofia Soloists he appeared in hundreds of concerts in Europe, North America, Japan, etc. He has been teaching at the State Academy of Music since 1989. In 1998 he was promoted Associate Professor.

He is one of the leading Bulgarian composers of his generation. He focuses on orchestral and chamber instrumental genres. His music is characterised by simple and clear genre structures and expression means, and emotional restraint. He also composed songs for children’s, mixed and equal voices choir, vocal music, etc. His works were prizewinning on numerous occasions. They were also performed and recorded with success in many countries.

Boris Petrov was born in 1970 in . A son of the great Bulgarian jazz saxophone player Petar Petrov – Parcheto, he discovered music at an early age and studied at the National school of music in with clarinet. As a student he won twice first prize in the contest for chamber music Golden Diana in 1984 and 1986. At that time Alexander Vladigerov invited him to play the saxophone in Rhapsody in Blue. His first steps with the saxophone were a decisive moment for the future of the young Boris who continued discovering the miracles of the saxophone and graduated “The National Academy of Music” in with saxophone as a student of Svetozar Rusinov.

The first formation of Boris Petrov was jazz trio Ruschuk. The three musicians won first prize in the jazz festival in 1992. The same year he attended the piano jazz master class of Milcho Leviev. From 2000 he has become a frequent guest at night jazz clubs and started actively participating in jazz festivals and forums in the country and abroad, making records for BNTelevision and BNRadio. From 2000 he has been part of the Bulgarian National radio Big Band as a saxophone player and a guest soloist of the BNRadio symphony orchestra.

For two years now Boris Petrov is a music director of Ruse Jazz Festival, an annual event established by his father 40 years ago. Boris keeps the traditions alive and brings new flavors to the jazzing .