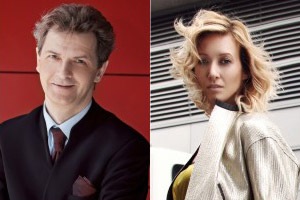 Jacek Rogala is a graduate of the in (), where he studied composition with Grażyna Pstrokońska-Nawratil and conducting with Marek Pijarowski (diplomas with distinction in 1990 and 1992). In 2011 he received a doctorate in musical arts at the F. Chopin University of Music in .

In the 1990s he was assistant conductor at the Wrocław Opera and collaborated as guest conductor with the Capella Bydgostiensis Chamber Orchestra in . He perfected his conducting skills with the Cleveland Symphony Orchestra, thanks to an Arthur Rodziński grant.  He also worked at the Music Department of Polish Radio in , acted as an adviser for music to the Minister of Culture and the Arts and was Head of the Contemporary Music Department of Polish Radio 2, . In 1999 he was Artistic Director of the Grażyna Bacewicz Days Festival organized by Polish Radio and Polish Television. He served as President (2000-2007) and Vice-President (2007-2010) of the Board of the Polish Society for Contemporary Music (ISCM)  and he was Director of the Competition of 20th and 21st-Century Music for Young Performers.  He is the author of the book Polish 20th-Century Music (PWM Edition).

In 2001 Jacek Rogala was appointed Managing and Artistic Director of The Kielce Philharmonic Orchestra and of the ‘Świętokrzyskie Days of Music’ Festival.

He has to his credit numerous first performances and radio recordings of pieces by contemporary composers and newly-discovered works. His recordings of 3 for 13 by Paweł Mykietyn and Concerto á rebours by Tadeusz Wielecki were placed first at the UNESCO International Composers’ Rostrum in (1995, 1999).  The former recording won the Fryderyk Prize in two categories: CD of the Year - Contemporary Music and Best Recording of Polish Music (2009).  A few years ago he started recording a series of CDs with The Kielce Philharmonic Orchestra entitled ‘The Polish Album’. In 2007-11 he served as Music Director in five productions of contemporary ballets produced jointly by the Kielce Philharmonic Orchestra and the Kielce Dance Theatre: Passion (P. Łukowiec), Szymanowski – Ravel. Impressions, It Happened in (K. Dębski), Secrets of the Virtual World (P. Łukowiec)  and Pinokio (M. Weinberg) .

Patrycja Piekutowska is one of the most outstanding violinist in Poland. She has been touring the world for 17 years. She has over 600 concerts to her name, delivered in 34 countries (Argentina, Austria, Belgium, Brazil, Bolivia, Canada, Czech, China, Chile, Ecuador, France, Germany, India, Irland, Italy, Kazakhstan, Kuweit, Nederlands, Peru, Poland, Portugal, Russia, Romania, Serbia, Spain, Sweden, Switzerland, Tunisia, Turkey, Ukraine, Uruguay, USA and Venesuela). A successful promoter of Polish contemporary music, she has been attracting new audience all around the world.
She graduated from the Chopin Music University in Warsaw, getting a diploma with distinction and two-year postgraduate master degree studies with Maestro Igor Oistrakh at the Royal Conservatory in Brussels, gaining the “Grand Distinction” diploma in 2002. Since 2002 Piekutowska has been teaching at the Chopin Music University in Warsaw, since 2010 at the Art Academy in Szczecin now at the Associated Proffesor position.
She performed at Carnegie Hall and Lincoln Center in New York, Teatro Colon in Buenos Aires, Teatro Guaíra in Curitiba, National Center for the Performing Arts in Beijing, philharmonic halls in Santiago de Chile, Bucharest, Montevideo, Beijing, Wuhan, Tianjin, Hamburg, Kiev and the National Philharmonic Hall in Warsaw, as well as in many other cities.
Her discography consists of 10 CD records, six of which feature mostly 20th century Polish music. Three of her albums (Penderecki's Violin and Piano Works, "Polish 20th Century Music" with works of Bacewicz, Lutosławski and Szymanowski, and Penderecki's Capriccio for violin and symphonic orchestra) won prestigious "Supersonic" awards in Luxembourg. The first Polish violinist to receive the MIDEM Classical Award, she collected the prize in 2008 in Cannes. Dedicated to Krzysztof Penderecki's music, the awarded album features her performance of Penderecki's Capriccio with the Polish Radio National Symphony Orchestra, conducted by the composer himself. The recording also won awards in Belgium, Spain and Italy.
The highlights of her career include more than 70 concerts in South America, including season opening of Teatro Colon with Buenos Aires Symphony Orchestra (the first performance in that hall of the second Wieniawski violin concerto), one in Montevideo with a Symphony Orchestra, numerous ones in Chile (Concepcion, Frutillar, La Serena, Punta Arenas, Valparaiso, Vina del Mar) and with the Santiago de Chile Philharmonic Orchestra; this latter was declared in a radio poll to be the best soloist performance of the season. She performed a J.S. Bach Concerto for two violins with Igor Oistrakh in the National Philharmonic Hall in Warsaw
It has been five years since she started touring the world with her own musical project: a solo violin recital entitled "From Bach to Penderecki". So far, she has delivered the recital in Moscow, Bucharest, New York, Madrid and Beijing. It was also program of her tournée in Bolivia, Ecuador and Peru. She has given master courses for many years, both in Poland and abroad, including Brazil, Chile, China, Canada, Peru and Venezuela. A teacher of the violin class at the International Music Courses in Łańcut since 2012, she has also sat on the jury in a number of violin competitions in Poland and abroad.  Violin and piano recitals have always constituted an important part of her artistic career, as reflected by her repertoire, which contains over 30 sonatas.
She has performed pieces by Krzysztof Penderecki for 10 years, with the most notable stage appearances at concerts celebrating the composer's 75th birthday in New York, Warsaw and Washington, as well as concerts in New York, Warsaw and Prague organized in 2013 to celebrate Penderecki's 80th birthday.
In 2014 her newest CD presenting Brahms and Franck Sonatas was recorded on the occasion of the 15th anniversary of artist's phonographic debut. In July she has received the special diploma "Leader of the future" in the project "25 new liders for the next 25 years of Poland". Patrycja Piekutowska is the only representative of music industry in the whole group. In August she received a medal Gloria Artis awarded by Minister of Culture and National Heritage of Poland for her contributions in promoting Polish music abroad.
CD's :
1998   Paderewski, Wieniawski, Lutoslawski   Maria Szwajger-Kulakowska - piano
2000   Sibelius & Wieniawski violin concertos   National Polish Radio Symphony Orchestra  Antoni Wit - conductor
2004  Penderecki - Violin & Piano Works  Beata Bilinska - piano
2006   Józef & Henryk Wieniawski  Edward Wolanin - piano
2006   Bacewicz, Lutoslawski, Szymanowski   Beata Bilińska - piano
2007  Penderecki - "Capriccio" for violin and orchestra   National Polish Radio Symphony Orchestra  Krzysztof Penderecki - conductor
2009  "The Power of Emotion"  violin and piano miniatures  Guastavino, Bloch, Khatchaturian, Kreisler,   Rozycki, Ratusinska, Massenet, Piazzolla,   Szymanowski, Rachmaninoff, Williams  Mariusz Rutkowski - piano
2013   "My Journey"   12 cities, 4 continents   pop music album
2014   Stalmierski - Violin concerto  Jakub Chrenowicz - conductor
2014   Sonatas - Brahms no. 3 & Franck  Anna Miernik - piano