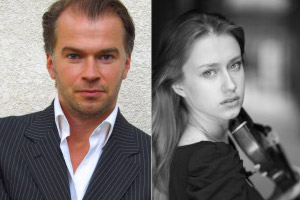 Later Glinka continued studying orchestra conducting at the Royal Danish Academy of Music in Copenhagen. At the same time he gained experience at the Royal Danish Theatre and took part in master classes given by H. Rilling, K. Sanderling and P. Boulez. In 2000 Gints Glinka was assistant with the Guildhall Academy of Music Symphony Orchestra in London, conducting Stravinsky’s Sacre du Printemps.

In 2001 Gints Glinka was granted a début year at the Royal Danish Academy of Music and a début concert with the Tivoli Symphony Orchestra. In the same year he conducted Mozart’s Don Giovanni in a co-production of the Royal Danish Theatre and the Opera Academy in Copenhagen.

Also in 2001 Glinka was  awarded the Classical Conductor's Prize by the Danish Conductor’s Association and was invited to join the association. In 2003 he was given a grant by the Danish National Bank and the Danish Conductors’ Association for studies with Maestro Zubin Mehta at the Bayerishe Staatsoper and  later with Maestro Daniel Barenboim at the Deutsche Staatsoper Berlin. In 2004 Glinka was acclaimed the Revelation of the Season by the Polish music critics.

Following from her initial education in Rīga, where she studied at the Emīls Dārziņš Specialist Music School with Romans Šnē, she was invited in 2007 to study with Professor György Pauk to study on a full scholarship at the Royal Academy of Music, London, where she completed an undergraduate degree with First Class Honours, and in 2014 graduated with a Master of Arts with Distinction. In 2012, she was awarded Her Royal Highness Princess Alice, Duchess of Gloucester’s Prize of 2012 for Exemplary Studentship. Throughout her course of study, she has been supported by the Countess of Munster Trust, Hattori Foundation, Martin Musical Scholarship Trust, The Craxton Memorial Trust, and the Steele Trust.

Kristīne has received lessons and performed in masterclasses with Leonidas Kavakos, Maxim Vengerov and Schlomo Mintz, and is the Artist-in-Residency at Buckingham University. She has recently been awarded a 3-year chamber music scholarship at the Villa Musica, Schloss Engers, Rheinland-Pfalz. Future plans in 2014/15 include performances with Latvian National Radio Live Recitals, concerto performances with various orchestras throughout Europe and Japan, and collaborations with Boris Garlitsky and Cello Duello.