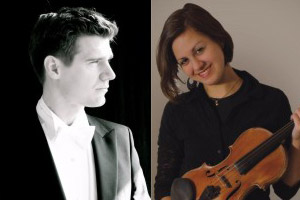 FRIDAY, 27 NOVEMBER 2015, AT 19:00
CONDUCTOR: VINZENZ WEISSENBURGER
SOLOIST: ANITE STROH (violin)
Program:
Franz Liszt: “Les préludes”, symphonic poem, G. 97
Hans Werner Henze: “Erlkönig” (“The Erlking”), fantasy from the ballet “Le fils de l'air”
(“The son of the air”) (first audition)
Robert Schumann: Fantasy in C Major for violin and orchestra, Op. 131 (first audition)
Franz Schubert: Symphony No. 8 in B minor, D. 759, “The Unfinished”
__________________________________________________________________________
VINZENZ WEISSENBURGER
Conductor
Together with members of Staatskapelle Berlin and the Children Choir of State Opera ‘Unter den Linden‘, Vinzenz Weissenburger conducted Berlin’s State Opera Christmas Concerts every year since 2011 with repertoire including works by Adam, Bach, Berlioz, Bruch, Händel, Humperdinck, Massenet, Mozart Nicolai, Poulenc and Vivaldi. Further concerts have been fixed for December 2014 and June 2015.
Vinzenz Weissenburger, born in Berlin, started his musical education at the age of six playing the piano, organ and as a member of a boy’s choir. From 2001 until 2006, he joined the University of the Arts Berlin to become a balance engineer – and was awarded numerous international prizes. From 2005 until 2011, he completed his conducting studies at Dresden’s University for Music with Hans-Christoph Rademann (chorus) and with Ekkehard Klemm as well as Christian Kluttig (orchestra).
In Master Classes with The Hillard Ensemble and the Stuttgart Bachwoche he refined his artistic competence. From 2003 until 2009, he was lecturer at Berlin’s Universität der Künste with the State and Cathedral chorus and also responsible for the education and rehearsals of the boy soloists for opera.
Vinzenz Weissenburger has been leading several choruses, including the Children´s Chorus of Deutsche Staatsoper ‘Unter den Linden’, with which he was Prize winner of the 2009 Federal Chorus Competition and went on tours of France, Germany, Italy, Latvia and Lithuania. Additional as Chorus Director he was responsible of Verdi’s Falstaff at Kammeroper Schloß Rheinsberg. He regularly works with the Chamber Chorus of Berlin’s State Opera. In 2012, Vinzenz Weissenburger prepared the Children Chorus for an EMI recording of Bizet’s Carmen under the baton of Sir Simon Rattle.
Vinzenz Weissenburger worked with Daniel Barenboim, Gustavo Dudamel, Marek Janowski, Andris Nelsons, Sir Simon Rattle as well as Massimo Zanetti and conducted – in concert or opera performances – orchestras including Concerto Brandenburg, Domkammerorchester Berlin, Erzgebirgische Philharmonie, Hofer Symphoniker, Kammersymphonie Berlin, MDR-Sinfonieorchester Leipzig, Neue Elbland Philharmonie, Philharmonisches Orchester Plauen-Zwickau, Sibelius-Orchester Berlin and Staatskapelle Berlin.
Since 2010/2011, Vinzenz Weissenburger conducted new productions at Berlin’s State Opera ‘Unter den Linden’: Puss in Boots by Cesar Cui, Eisenhans! by Ali N. Alkins and Wolf-Ferrari‘s La Cenerentola. In Dresden he conducted performances of Mozart’s Die Zauberflöte in 2010 and Lortzing’s Der Wildschütz with Neue Elbland Philharmonic in 2011. In June 2012, Vinzenz Weissenburger made his debut at Theater Hof, conducting Rossini’s Il barbiere di Seviglia.

Anite Stroh was born in 1995 in as the 3rd Child of a musically inspired Family.

In the Age of 3 Years, she was for the first Time on a Stage as a member of The Family-ensemble. A few Months later, she received her first Violin class and just a few Years later, she started  playing a lot of Concerts in the North of Germany. With 9 Years, she got accepted as a Young-student  at the “MusikhochschuleLübeck” (Class of Prof. M. Egelhof). In the same Time Anite started working with the successful Violin teacher Mrs. A. Nechiporouk – Bron. In 2010 she eventually quit in Lübeck and started studying as a Young-student with Prof. P. Munteanu () for a Year, until October 2011 when she started studying Bachelor in with Prof. K. Wegrzyn.

A lot of her Inspirations Anite received on Master classes and Workshops with Professors as for example Lewin Kaplan and Shmuel Ashkenasi/USA, Daniel Nodel and Josef Rissin/Karlsruhe (), Stephan Picard/Berlin (), Michael Vaiman/Russia etc. Her first 1st Prize Anite won in the Age of 5 Years, at the National Competition “Jugendmusiziert”. After this success she fortunately continued winning 1st Prizes for many Years at this Competition in different Categories (as in f. e. Piano-/ String trios, Piano Solo, Piano-/ String duos, Solo Violin etc.).

Just recently in March 2013 she was a laureate at the “Jascha Heifetz International Competition for Violinists” in . Anite also started to perform a lot of Contemporary Music, and it started to be Important to her as is Classical Music. She received the “Hans Sikorski-Gedächtnis-Preis” for the best Interpretation of a Contemporary Piece by a living Composer (N. First).

In Indianapolis/USA she performed on the Piano with her Sister Irene Stroh (Violin) the Sonata for Violin and Piano in g-Minor by the German-American Composer Christian Thompson, which has been a World Premiere and has been appreciated by Critics and Audience. Performances brought the young Artist to many Concert halls in , , , , , , and .

Anite performed with several Orchestras. With the “KlassikPhilharmonie”/Hamburg (Germany) (under the direction of Mr. R. Stehli), the “Youth Orchestra Dornbirn”/Austria/Germany (under the direction of Mr. G. Simma), the “KremerataBaltica”/Lithuania, the “Lower Saxon State Orchestra”/Hanover (Germany) andwith the “Lviv Philharmonic Orchestra”/Ukraine. For a lot of Years she was a Fellow of many Scholarships in . As a Laureate of the “Deutsche StiftungMusikleben” Anite plays a Violin by Lorenzo Ventapane (Neapel, 1806).