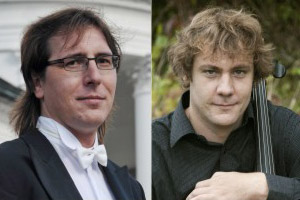 Martin Peschík studied piano and conducting at the Conservatory of Music in České Budejovicĕ in the Czech Republic. He graduated from the Academy of Art at the University in Brno, in the class of prof. Jan Zbavitel. Since 2011, he has been director and conductor of West-Bohemian Symphony Orchestra in Mariánské Láznĕ. From 2002 until 2008, he served as conductor and choirmaster at local theatre in České Budejovicĕ. From 2008 until 2011 he became  the music director and the chef of South-Bohemian Theatre Orchestra. Since 2011, he has been collaborating with the South-Bohemian theatre as a guest-conductor, performing many operas, operettas and ballets (Tosca, La Bohéme, Pagliacci, Otello, La forza del destino, Rigoletto, La Traviata, Rusalka, Jakobín, Čert a Kátja, Hubička, Der Freischütz, Martha, Faust, Falstaff, Il barbiere di Siviglia, L´elisir d´amore, Il signor Bruschino, Don Pasquale, Don Giovanni, Die Entführung aus dem Serail, Orpheus in der Unterwelt, Der Zigeunerbaron, Die Fledermaus, Der Vogelhändler, Vinobraní, Finian´s Rainbow, Hello Dolly, Don Quijote, Esmeralda).  He collaborated with the National Theatre of Brno, Niederbayern Symphony Orchestra, the Moravian Symphony Orchestra Olomouc, the Czech Chamber Philharmonic, the South-Bohemian Chamber Philharmonic, the Czech Symphonic Orchestra Prague, the Symphony Orchestra Sibiu, the Symphony Orchestra Karlovy Vary and with many others. As conductor, he visited many european countries such as Germany, Austria, Sweden, Switzerland, Norway, Netherlands, Denmark, Romania. He has been invited by prestigious and famous musical festivals: International Music Festival Český Krumlov, Festival of Chamber Music Český Krumlov and others. Martin Peschík is a composer, he also performs as solo pianist and accompanist.

Václav Žák  began to play the cello at the age of 6 in the local music school, in the class of Rudolf Weiss in České Budějovice, Czech Republic. Since 13, he has been student at the University of Music in Vienna in Austria in the class of Angelica Petry May. After graduating from the bilingual Czech-anglo high school, he was accepted in the class of prof. Maria Kliegel at University of Music in Cologne, Germany, where he had participated also in the mastercourse of Siegfried Palm. In 2009, he successfully graduated from the Cologne University of Music. He played as soloist with such orchestras in the Czech Republic – Prague Chamber Orchestra with conductor Jiří Bělohlávek, South-Bohemian Chamber Orchestra with conductor Jan Talich. They performed together the second cello concert of Camille Saint-Saëns. With South Bohemian Theatre Opera Symhony Orchestra conducted by José Cura, he performed Dvořák cello concert in České Budějovice, Czech Republic. He is playing regularly with the West-Bohemian Symphony Orchestra Marienbad, in the Czech Republic. Also, he plays radio broadcasted recitals in the Czech Republic. His repertoire includes the famous cello concertos of Dvořák, Schumann, Saint-Saëns first and second concerto, second concerto of Bohuslav Martinů, Bloch-Schelomo and many compositions for cello.

Ivo Medek (1956) graduated from the Technical University of Brno (where he studied computing and software) and from the Janáček Academy of Performing Arts (JAMU), where he studied composition with Alois Piňos. Medek has composed more than fifty chamber, orchestral and electro-acoustic works, operas and multimedia projects, many of which have been performed at celebrated concert venues both in Europe and in the USA and have earned him awards and prizes in various competitions. Music theory is another of his great interests. Over the last years Medek has been gradually evolving his own particular method of composition, characterized primarily by the building-up and organization of various independent musical processes. In 1985, together with Zdeněk Plachý, he founded an ensemble for contemporary music Art Inkognito (now Ars Incognita), and led until 1990. In 2000, he co-founded the Marijan Ensemble specializing in improvised music and the realization of multimedia projects. Ivo Medek has been teaching at various universities since 1982, and at the JAMU since 1990. He has given lectures and classes at a whole range of music academies and faculties abroad. Since 2002, he has been the dean of the Music Faculty of JAMU.

„Wings” (2005) was premiered by members of the Ensemble Recherche together with students of JAMU in a live workshop concert recording, with Zsolt Nagy as conductor and with the support of Czech Radio Brno.

„Wings have fascinated me as far back as I can remember. Perfectly natural, perfectly functioning, perfectly inimitable. Laughing serenely at our hi-tech perfections. And all the time it is just a movement down and then back up again – sometimes slow and majestic, at other times in the frenzied invisibility of vibration…”