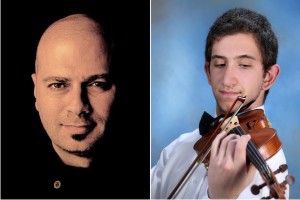 FRIDAY, 6 NOVEMBER 2015, AT 19:00
CONDUCTOR: YIANNIS HADJILOIZOU
SOLOIST: ANDREAS ZINONOS (violin)
Program:
Franz Schubert: “Rosamunde” Overture, D. 644
Andreas Moustoukkis: “Oktana” (first audition)
Michalis Hadjiloizou: Ballet Section from the Opera “Eleftheria” (first audition)
Maurice Ravel: “Tzigane”, Rhapsody for Violin and Orchestra
Yiannis Hadjiloizou: “Le Valse de l'Amour” (“Waltz of Love”) (first audition)
„Servikos”, Cypriot Traditional Dance (first audition)
Ludwig van Beethoven: Symphony No. 8 in F Major, Op. 9
______________________________________________________________________
Yiannis Hadjiloizou was born in Nicosia in 1976. He took his first Piano lessons with his father Michael - composer of the first Cypriot Opera “Eleftheria”. He graduated from the Cyprus Academy of Music and the studio of its founder Ms Despo Hadjiloizou-Frangakou with Diplomas in Piano Performance & Pedagogy and Harmony. After a 10-year stay in the USA he returned to Cyprus with a Bachelor of Music in Piano Performance, a Master of Music in Piano Performance, and an M.M. in Combined Choral and Orchestral Conducting from the American Conservatory of Music, a B.M. in Theory and M.M. in Musicology from Roosevelt University, an M.M. in Orchestral Conducting from the University of Oklahoma, and a Doctor of Musical Arts in Orchestral Conducting from Boston University. His mentors include Composers and Conductors Michael Hadjiloizou, Nicolaos Astrinidis, Michael Ruiz, and Theodor Antoniou. He has performed as Conductor and/or Pianist throughout Europe, Middle East, China, South Africa, Canada, Russia, USA, whilst in 2012 his was honoured as Representative Artist of the Cyprus Presidency of the Council of the European Union with concerts in Australia. He received special praise for his 2005 debut with contemporary ensemble ALEAIII and the historic Sarajevo Philharmonic Orchestra in 2008, and has performed as Pianist for five different Presidents of the Republic of Cyprus at the Presidential Palace in Nicosia. As a Composer, his Music has been performed worldwide in such venues as Vienna’s Musikverein, and has been awarded by the Ministry of Education and Culture of the Republic of Cyprus, Festival de Cannes, and Thessaloniki Documentary Festival. In 2007, he received a commission by the then Laiki Bank to compose his Le Valse de l’ Amour, which replaced Carl Orff’s O Fortuna as soundtrack of the Radiomarathon, and received its world premier by the Cyprus Symphony Orchestra during the monumental Cyprus Peace Concert 1 at the Terminal of the Nicosia International Airport, celebrating International Day of Peace on September 16, 2010. The year before, he was commissioned to compose the Music for the opening of the New Larnaca Airport. Other commissions include Music for Ecumenical Patriarch Bartholomew, the United Nations, and the Cyprus Symphony Orchestra. His 2012 live recording of Mozart’s Requiem has been included as soundtrack for the 2015 Hollywood feature film Bereave. He is the only Artist to have performed at all of Cyprus’ most prestigious venues - Kourion Ancient Amphitheatre, Pafos Ancient Odeon, Pafos Medieval Castle, Larnaca Castle, Nicosia Municipal Theatre, Queen Victoria Gardens, Ayia Napa Square, Rialto Theatre Limassol, Pallas Theatre Nicosia, American Embassy, European Commission, Cyprus Archbishopric, Anassa Hotel, Presidential Palace, etc - and is one of the main features of Pafos 2017 European Capital of Culture.  He is the founder of the Chicago Conservatory Camerata (1999), Norman Civic Orchestra (Oklahoma, 2002), Boston Chance Orchestra & Chorus (2006), and Melodramatic Stage of Nicosia (2006). He held the post of Classical Music Producer for the 1st Channel of the Cyprus Broadcasting Corporation for eight years, and has served as Lecturer of Music at European University Cyprus, Guest Lecturer at Berklee College of Music and Vienna Konservatorium, Associate Conductor at Oklahoma University, and Assistant Conductor at Boston Opera Institute. He is long a Guest Conductor with CySO, and was appointed Artistic Director of the Orphean Singers in 2012. He is also the President & Artistic Director of the Cyprus Academy of Music (Established 1956) since 1999.

Andreas was born in Nicosia on 23June 1998. He started violin lessons at the age of six with Mr Pavlos Koukos as his teacher, while since 2008 he has continued lessons with teacher Mr Sorin – Alexandru Horlea.  He was a member of the Strings Workshop of the Cyprus Symphony Orchestra Foundation (CySO) from 2008 to December 2012.  He has been a member of the Cyprus Youth Symphony Orchestra (CyYSO) since 2010, and Concertmaster of the orchestra since 2012, while he is also holder of a scholarship by the Music Workshop of the CyYSO, under the guidance of its conductor Mr Yiorgos Kountouris.

After auditions in the 27 European Union countries, he won a scholarship of the Leverhulme Foundation and in the summer of 2013, became a member of the Summer Academy of the Youth Symphony Orchestra of the European Union in Grafenegg, Austria, during which time he appeared with the conductor Krzysztof Urbański.  In June 2014 he won the first prize for young musicians in the International Festival for Contemporary Music, Avaton, in Limassol.  In the summer of 2014 he was a member of the Symphony Orchestra of Mediterranean countries in France, where he took part in three concerts in the Marseille area.

Andreas has already made public appearances as a soloist with CySo and CyYSO, performing works of several composers.  He has also performed during several events both in Cyprus and abroad. In 2012 he gave his first solo concert in Nicosia.