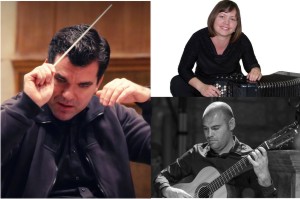 He recorded his debut album “Elegia” for Classic Concert Records with the Russian Symphony Orchestra Prokofiev featuring works by Di Marino. Recently released on label album “Sensations” featuring Di Marino and Piazzolla Bandoneon Concertos recorded with the Croatian Philharmonic Orchestra and Italian virtuoso Cesare Chiacchiaretta was quickly followed by recording of album “” with the Malta Philharmonic Orchestra for the same label featuring music of Charles Camilleri. Miran Vaupotich is one of international ambassadors for the EMMA for Peace () under the patronage of UNESCO and honorary presidency of Riccardo Muti. In 2015 he was awarded the Honorary Diploma by the International Academy of the rating technologies and sociology "Golden Fortune" for significant contribution to development of the world symphonic music and has been listed in the Hubners Who is Who, a known reference publication of notable people in the field of economy, politics, science, culture, arts and sports. Miran Vaupotich holds a master’s degree from the in where he was the recipient of the Rector Scholarship, and also earned conducting degree from the in .

Ivana Levak Vaupotić’s career has led to solo appearances with the Kaliningrad Philharmonic Orchestra, Paderewski Philharmonic Orchestra and Slovak Sinfonietta among others.  Whether in front of an orchestra, in the recital hall or in a chamber music setting, Ms. Levak Vaupotić’s impresses audiences and critics alike. Current concerto engagements feature Ivana Levak Vaupotić as guest soloist with the Beijing International Chamber Orchestra in China, Ulyanovsk Symphony Orchestra in Russia and Vienna Master Orchestra in Austria. Born in Zagreb, Croatia in 1979, Ivana Levak Vaupotić began her classical accordion studies with Marija Ivković. When she was 14, Ivana entered The Elly Bašić College of Music studying with Marjan Krajna. Ms. Levak earned Bachelor and Master of Music degrees from Juraj Dobrila University of Music in the town of Pula where she studied classical accordion with Slavko Magdić and conducting with maestro Miroslav Homen. As soloist and member of chamber ensembles she is awarded with numerous valuable awards. Ivana performed in Italy, Germany, France, Belgium, Netherlands, Romania, Russia, Czech Republic, Slovenia and Croatia. She has participated in master classes with internationally recognized performers and pedagogues like P. Soave (USA), O. Murray (Great Britain), D. Modrušan (Croatia), V. Balyk (Ukraine), J. Shishkin (Russia) and A. Skliarov (Russia). In 2004 she founded AccoDuo with which she performed internationally and won eminent competitions such as 14th International WCH Competition in the USA and IBLA Grand Prize World Competition in Italy, and recorded CD Romance for the Classic Concert Records label from Salzburg, Austria. An avid chamber musician who thrives on innovative collaborations, Ms. Levak recently collaborated with eminent composers such as Peter Machajdik, Yevgeni Derbenko, Eric Schwartz and many others. Ms. Levak Vaupotić currently teaches at the Franjo Lučić Arts School in Velika Gorica, Croatia.

Frane Verbanac was born in 1981 in the town of Split (Croatia). He started to study guitar at the age of 8. After primary music education he moved to Zagreb and continued studying with prof. Ante Čagalj at the „Elly Bašić“ music school. From early days he attended summer guitar school „Upbeat Hvar“ where he started collaboration with friend and colleague Kajo Milišić. Though they were still little children, they formed Split guitar duo and performed a lot of notable concerts and took a part on many music competitions with outstanding results. He starts major studies with prof. Franz Halász at the "Hochschule für Musik Augsburg" in Germany. At the same time he studied early music with the Argentinean lutenist Eduardo Egüez. In 2007 he obtained his master diploma under the guidance of prof. Franz Halász. While studding, Frane attended many masterclasses and had opportunity to work with various guitar players. As student, he founded with his friends  Croatian Guitar Quartet and hold concerts on many festivals of classical music in Croatia and abroad („Die lange Nacht der Musik“ in München, Atrium Klänge in Nürnberg, „Split Summer Festival“ in Split…) In 2003 quartet recorded the album "Summit" with music of Argentinian composer Astor Piazzolla. In his musical career he took place in various competitions and won numerous awards in solo and chamber music categories. He is a member of renowned chamber ensamble Zagreb Guitar Quartet and works as guitar professor at music school  „Elly Bašić“ in Zagreb.